Sharing the Impact of Emergency Cash 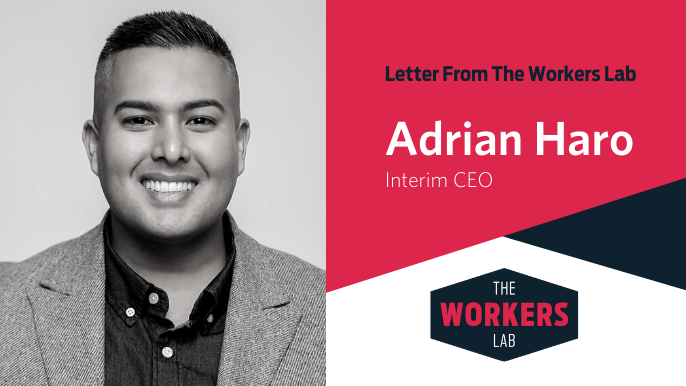 Two years ago, we set out to explore the impact that emergency cash could make in the lives of gig workers. On May 21, we shared findings from the Workers Strength Fund in a virtual briefing.

What we learned can inform policies, programs, and decisions about how to support workers not only in today's pandemic, but also in tomorrow's economic recovery.

We used Google’s Design Sprint Methodology to design and pilot the Workers Strength Fund, a unique platform that allowed us to distribute one-time, no-strings attached $1,000 cash grants to gig workers. These cash grants were the foundation for our learning about how and when emergency cash can make a difference.

Attending the event were representatives from The Rockefeller Foundation and Google.org, two of the seed funders for our Design Sprint, which also included The Prudential Foundation. We were also joined by Timothy Flacke and Keyarash Jahanian from Commonwealth, our lead partner in designing this emergency cash delivery experiment.

The experiment's key advisors, Rachel Schneider and David Weil, also participated in the briefing, as did Molly Cohen from the San Francisco Office of Financial Empowerment and Adam Roseman from Steady, one of the partners who helped identify and connect the emergency funds with gig workers in need of emergency funds.

We never imagined that we would be sharing our findings at a time when the world would be talking about this issue. We could not have foreseen, while we were conducting the largest emergency cash transfer experiment of its kind, that less than one year later, we would have such critical and timely insights to lend.

Holes in the safety net

When we began to lay the groundwork for the experiment in late 2017 and early 2018, it wasn't because we had premonitions about a global pandemic. Rather, there were three economic and workforce trends that directed us toward emergency cash. They were:

We chose to take action because it was clear: The existing safety net does not meet the needs of today's workers. The way we work has evolved. Our safety net hasn't.

In our current safety net there are many federal programs such as:

The private sector also plays a role in providing a safety net to employees, with some companies providing:

The programs above are available to workers who contribute to them and who work for employers who contribute to them. But gig work - now estimated to be anywhere from one-tenth to one-third of the American labor market - circumvents this system. Because gig workers using platforms such as Uber, Lyft, Instacart, and TaskRabbit are not employees of those companies (they’re actually contracted to do this work), many don’t have access to these benefits.

What do gig workers do when their car is broken, but their car is their source of work? If they pay to fix their car, then they can't pay their rent. It's an impossible situation. With the Workers Strength Fund pilot, we created a possible solution.

An emergency cash fund has a real impact on real people

For Uri, a 51-year-old married father of three who works as a rideshare driver in New York City, the Workers Strength Fund provided some help with rent. He drew $1,000 emergency cash after receiving an eviction notice for late rent. “The fund was very helpful and gave me and my family some temporary reprieve,” he said gratefully.

For 27-year-old single mother Danira, who works as a tasker in Hayward, California, the Workers Strength Fund made all the difference. She needed money for her car registration and related fees. With her emergency grant, she was able to pay all her car-related expenses and continue to work. “Before I got that money," she said, "I was kind of depressed. But with WSF, life went smoother than expected.”

Danira's experience falls into the Newly Aspirational group of workers. In the report of our findings, workers sort into four groups:

Findings from the largest emergency cash experiment of its kind

In total, the Workers Strength Fund delivered emergency cash grants in the amount of $1,000 to 350 gig workers.

Key among the findings from the pilot was that the emergency cash helped get people back to work. Like Wilson and Danira, 61 percent of people said that their emergency caused them to miss work. After receiving cash from the Workers Strength Fund, 75 percent of those folks said they were back to work - most within two weeks.

Another key finding from the report is that emergencies are costly. The average amount of the emergency that sent people turning to the Workers Strength Fund was $3,070.

Danira and Wilson illustrate another key takeaway from the Workers Strength Fund: Ongoing expenses such as rent or utilities can quickly become emergencies due to gig workers' income volatility.

The two most common reasons people faced money emergencies related to housing and transportation. Rent and/or utility bills made up over 37 percent of requests and auto-related expenses were over 26 percent.

Public vs private - who pays for emergency cash?

Providing emergency cash grants to workers requires someone to commit that money to a fund. For our pilot, our philanthropic partners provided catalytic funding to make this experiment possible. That’s often the power of philanthropic investment, and why The Workers Lab exists: to give new ideas that increase power for workers a chance to succeed and flourish.

So, who pays in the long-term?

Molly Cohen, interim director of San Francisco's Office of Financial Empowerment, has been leading a similar pilot for the City and County of San Francisco based on the Workers Strength Fund. Molly asserted that the pilot’s demonstrable impact on workers’ financial security sends a powerful message to the public sector.

"Something that's sort of near and dear to our heart is making sure that if the government's giving people money, they're doing it in a way that builds financial capacity," she explained.

While not an explicit part of the research or report, the question of "who pays for emergency help?" was part of the virtual briefing we held last week.

In addition to the role that public policies and funds play in the safety net, there is also a role for the private sector.

Author and CEO Rachel Schneider, a lead advisor on our Design Sprint, spoke to the role of private employers in filling this hole in the safety net. "Employers can also be counted on to do their share and to contribute into funds like these for their workers," she said in the briefing.

"They're not going to do it unless it's easy and cost effective and efficient for them to do it. And that's where our philanthropic capital has been so critical - not only to do the case-making work that this Design Sprint represents, and to do the field-building work and communication work that this webinar and the research associated with it represent, but also to invest in building the infrastructure that then makes it easy for workplaces to deploy a solution like this."

Where does the emergency cash conversation go from here?

Before COVID-19, our Design Sprint had already provided tremendous insight into just how destabilizing an emergency can be in the lives of workers. We had real-life stories from workers showing how one unexpected expense can set off a spiral of financial misfortune.

Emergency cash, especially in moments like this, has a value and can help, but it is not a silver bullet or a panacea.

The conversation must continue.

David Weil, Dean of The Heller School for Social Policy and Management at Brandeis University who served as a lead advisor on our Design Sprint, closed our briefing with this important thought:

"To make sure that the lives of working people can really be elevated,” he said, "we want to make sure we keep the momentum that has been stirred by this crisis to address these deeper problems.