Fighting for Workers During the COVID-19 Pandemic 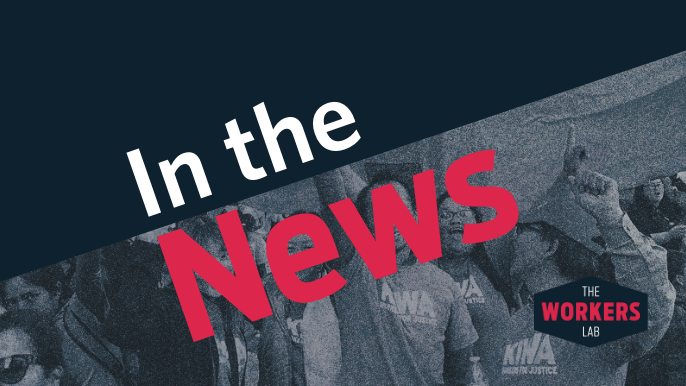 NationSwell published a great interview with our Interim CEO Adrian Haro about why our work matters so much right now.

During the interview, Adrian discusses how workers who were vulnerable before the COVID-19 outbreak are at most risk now. That's why The Workers Lab quickly took action in March to launch The Workers Fund COVID-19 Rapid Response.

The pandemic has brought to light the many holes in our country’s social safety net.

At the same time, you are seeing in a matter of weeks, the rapid construction and revision of the social safety net that we would argue should have been in place decades ago. And so, for me, when I see how workers are finally being given their due, so to speak, are being seen for the value and the critical nature that they play in society in normal times, and you talk about what I imagine is going to be a tremendous opportunity through legislation, through organizing, creating a new social safety net that recognizes that value of workers -  that heartens me.

Adrian also discussed how workers did not share in the benefits of the past century's growth. He connects the work of The Innovation Fund to addressing that exclusion.

Innovation is very, very much also a tool to make sure that all the workers that didn’t benefit from the policy gains of the 20th century can do so now, that they are included in those laws and in that progress.

I could go down the list of queer people, people with disabilities, immigrants, farm workers, domestic workers -  all groups of workers that in some way, shape or form have been excluded from the progress of the 20th century. And we should be using innovation and experimentation to solve those problems as well.

Read the full interview with Adrian Haro on NationSwell.

About The Workers Fund
Workers are experiencing devastating loss of income due to the COVID-19 epidemic. They need immediate help, especially gig and low-earning contract workers without employer-based benefits. In response to this crisis, The Workers Lab launched The Workers Fund. The fund provides up to $1,000 in emergency cash grants to workers who have lost income due to the epidemic. With generous support from partners including the Marguerite Casey Foundation and Blue Meridian Partners, The Workers Fund has already distributed more than $100,000 to qualified workers. If a worker has ever performed a valuable service for you, consider doing something now for them. Give to The Workers Fund and 100% of your donation will go to people who need help now.

Topics: In The News